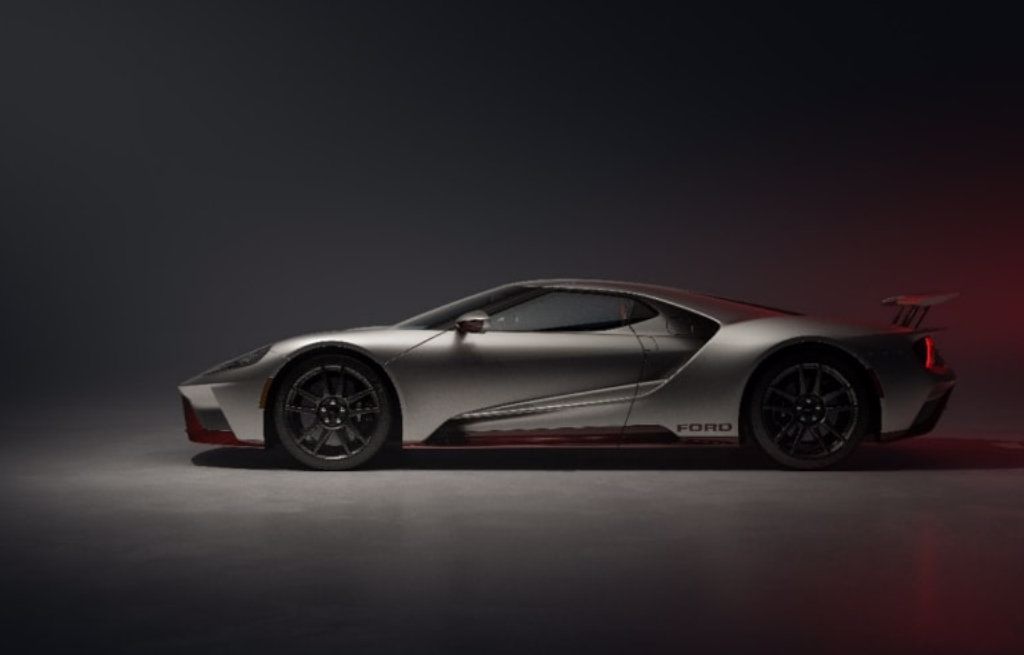 “With innovative materials, design and engineering, the Ford GT is unlike any other production supercar,” said Mark Rushbrook, global director, Ford Performance Motorsports. “As we close this chapter of the road-going Ford GT, the GT LM Edition gave us a chance to inject even more heart and soul from a podium-finishing race car, furthering the tribute to our 2016 Le Mans win.”

The Ford GT remains exclusive, and these final 20 special-edition supercars will add to its collectability. Deliveries of the 2022 final model-year Ford GT LM Edition begin this fall with production wrapping up later this year.

With its carbon fibre body proudly lacquered in Liquid Silver exterior paint, the limited-edition Ford GT LM is uniquely finished in either a red or blue theme throughout, honouring the red and blue race livery of the Le Mans winning No. 68 Ford GT.

For a unique appearance, customers can choose from exposed red or blue tinted carbon fibre that underscores the lower aerodynamics of the supercar. This includes tinting the ultra-lightweight material on the front splitter, side sills and door sills, plus engine bay louvers, mirror stalks and rear diffuser. Exposed gloss carbon fibre 20-inch wheels with corresponding red or blue inner-barrel accents, plus titanium lug nuts and Brembo® brake calipers lacquered in black to further modernize this package.

Unique to the Ford GT LM is a 3D titanium-printed dual-exhaust that features a cyclonic design inside the tips and hints at the twin-turbo 660 horsepower EcoBoost® engine. Above the tips, a titanium GT LM badge is also 3D printed.

Inside, the Ford GT LM Edition’s interior features unique appointments including Alcantara®-wrapped carbon fibre seats with a matching red or blue driver’s seat, and Ebony passenger seat with accent stitching that matches the driver’s seat colour, as well as the engine start button. The instrument panel is wrapped in Ebony leather and Alcantara, while pillars and headliner are wrapped in Ebony Alcantara. Carbon fibre carries into the cabin, appearing on the console, vent registers and lower A-pillars with a matte finish.

The result: the team located the third-place 2016 Ford GT (No. 69) race car’s engine that was disassembled and shelved after the race, ground down the crankshaft into a powder, and developed a unique bespoke alloy used to 3D print the instrument panel badge for each of the 20 special-edition supercars.

The 2022 Ford GT LM Edition pays tribute to the third-generation supercar’s overall win and the No. 68 Ford GT of Sébastien Bourdais (FRA), Joey Hand (US) and Dirk Müller (GER) who crossed the finish line at the 2016 Le Mans 24 Hours.

Similar to the epic 1966 Ford v. Ferrari battle, the No. 68 Ford GT took the lead for the final time in the 20th hour of the race after going one-on-one with the No. 82 Ferrari. Hand was behind the wheel on the three occasions that the Ford passed the Ferrari, rekindling a 50-year-old rivalry between the two car manufacturers.

The No. 69 Ford GT of Ryan Briscoe (AUS), Scott Dixon (NZ) and Richard Westbrook (GB) joined the winners on the podium after scoring third place. The Nos. 66 and 67 Ford GTs finished in fourth and ninth places, respectively.

The 2022 Ford GT LM also honours the herculean effort and drive from the Ford Chip Ganassi team that transformed the car into a Le Mans winner in just over one year (395 days).

The Ford GT LM adds to the celebration of the supercar’s landmark moments in motorsports history, including, of course, its Le Mans titles. In all, the series includes 10 ultra-limited-edition supercars. These include:

In addition, the Ford GT Mk II, a limited-edition, track-only GT co-developed by Ford Performance and Multimatic also concludes by the end of the year with a total of 45 vehicles.

The declared WLTP fuel/energy consumptions, CO2-emissions and electric range are determined according to the technical requirements and specifications of the European Regulations (EC) 715/2007 and (EU) 2017/1151 as last amended. The applied standard test procedures enable comparison between different vehicle types and different manufacturers.